gathering some gumption - a stuffed pepper to soup adventure 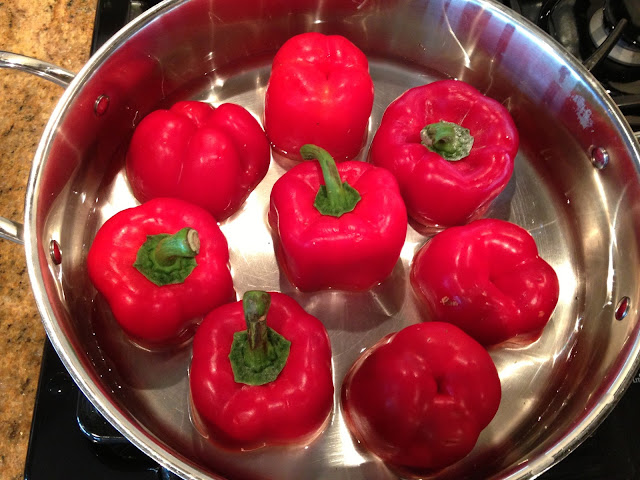 one of my new year's resolutions was to muster more cooking gumption in the kitchen.  gumption to make things from scratch with or without recipes in front of me.

i finally lit it up.

i cooked a meal from scratch with only a red lentil recipe for inspiration.  hee hee!

... have i told you i cook to this soundtrack practically every night?  i hope you like "gumption" too.

this meal went a looooooooooong way for us.  i ended up turning all of the leftovers into one of the best soups e.v.e.r.  how do i know?  i had a huge amount left over and it didn't last very long.  two dinners and four lunches of food...not bad there babycakes!

it was a genius decision to combine quinoa (which i always prepare plain jane) and red lentils.  pat pat pat.

a most excellent stuffed pepper to soup adventure

1. halve 4 red peppers, clean the seeds out and place them cut side down in a pan with water.  cook and steam for about 10 minutes.  remove and set aside in a bowl. 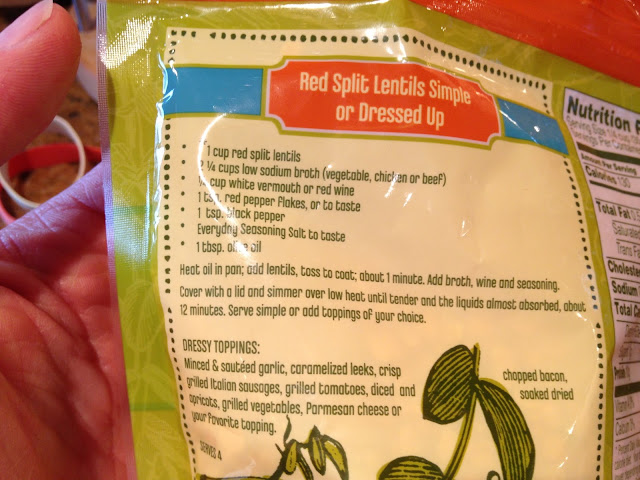 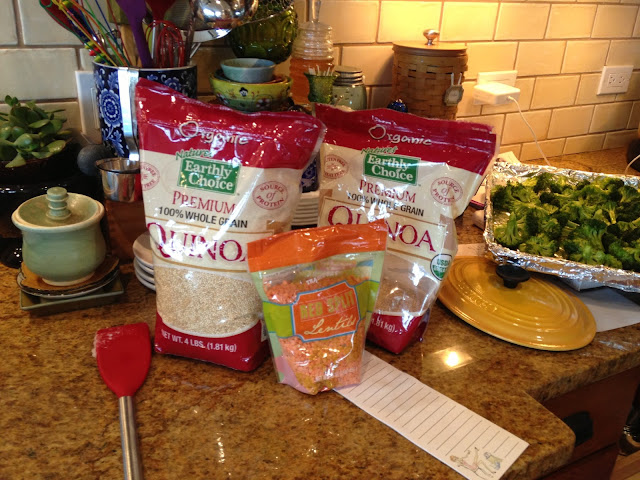 "come as your are" countertop ingredients.  no staging permitted in my kitchen. 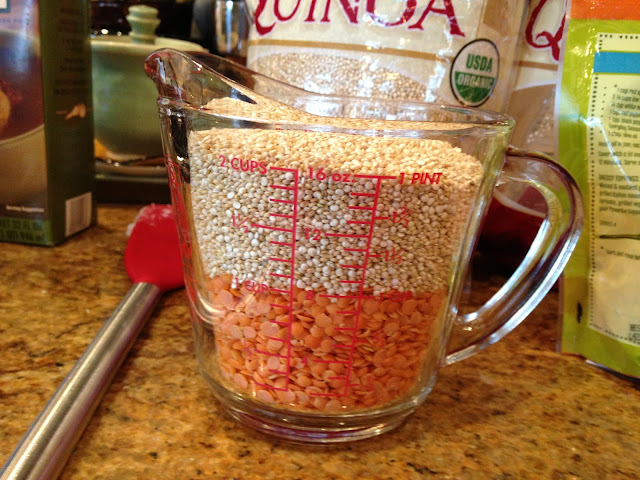 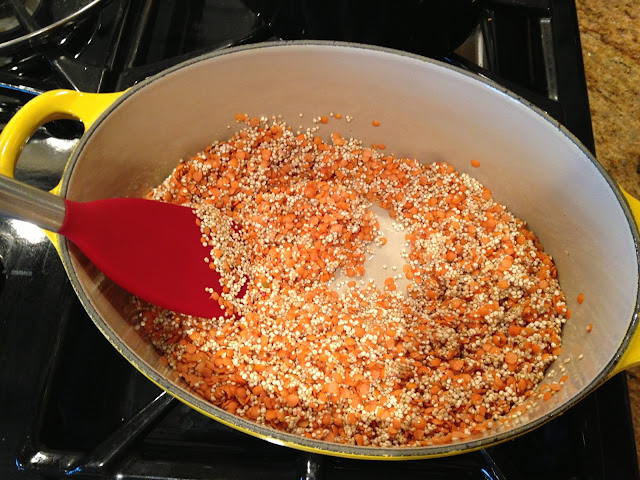 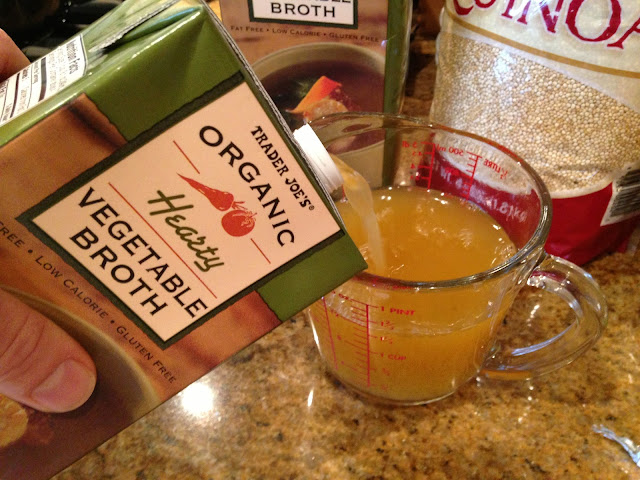 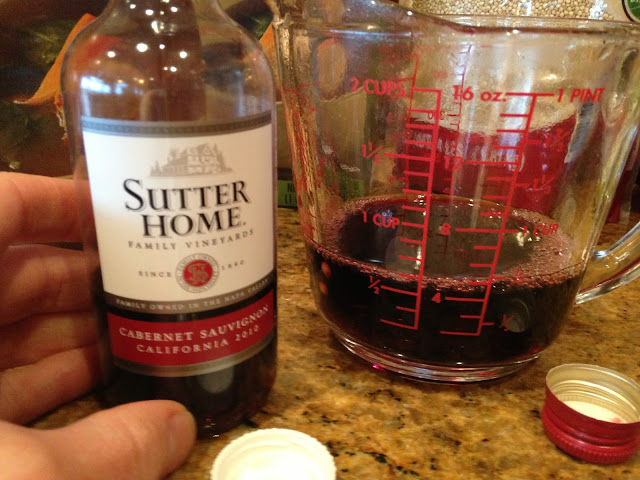 these mini bottles give great portion control when cooking.  i hate to waste my best wine and open a bottle that may not be enjoyed that night!  cheers! 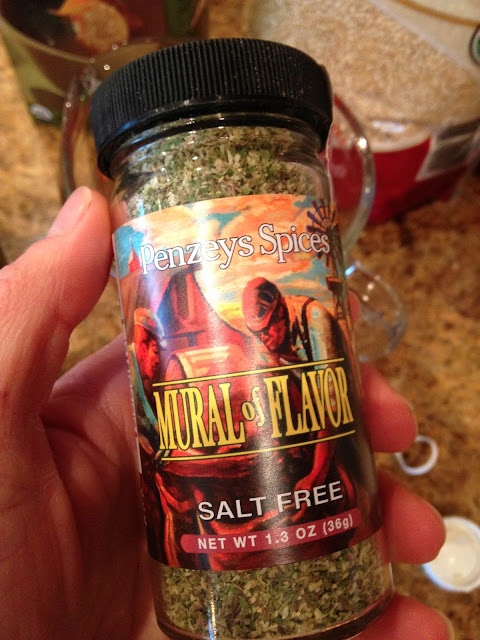 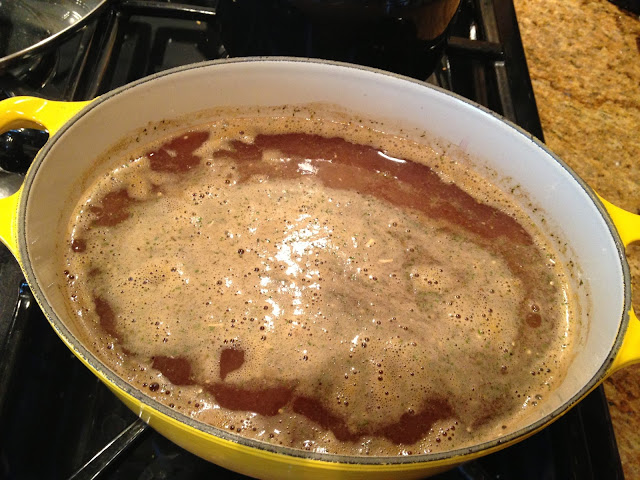 melt the oil and toss the quinoa and lentils until coated.  dump the rest in and bring to a boil.  reduce to low and cover for 30-40 min or until liquid has cooked off and you are left with fluffy deliciousness.  i didn't know it at the time, but this makes waaaaay more than you need for 8 stuffed peppers.  that's how the soup was born...out of a miscalculation.  how sweet is that!? 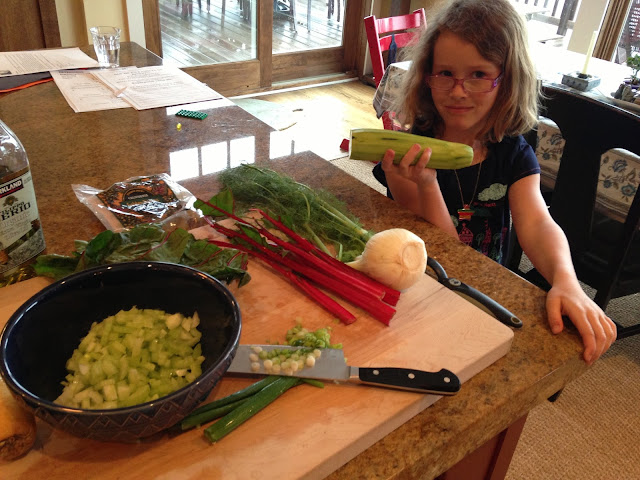 while the quinoa and lentils are cooking, raid your fridge for the plethora of organic veggies.  i had no idea what i was going to use until i opened the crisper.  that is living on the edge for me.  chop chop chop em all into similar sized pieces & mince the garlic. 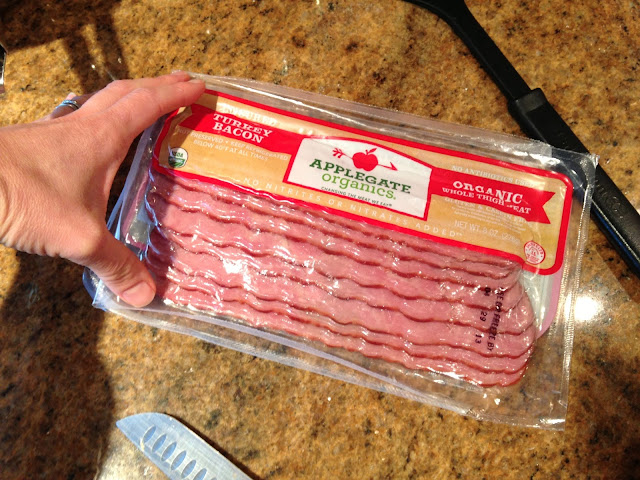 cook up the turkey bacon first and set aside (optional).  using the same pan, melt about 2 T of coconut oil and add the chopped veggies.  cook until soft.  we've been cutting waaaaay back on meat...i used to cook it every night.  now, 1-2 nights a week tops.  i'm really excited and proud of how we're cutting back as it's saving us $$$ and i am relying more on nutrient dense vegetables as a main nutritional component.  now if my kids would only say, more please!  baby steps... 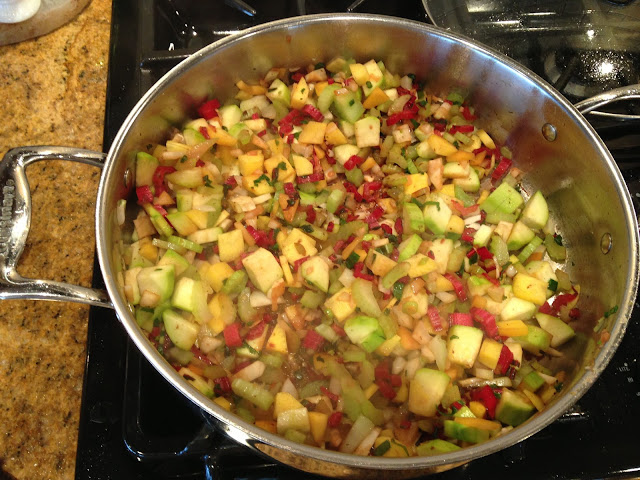 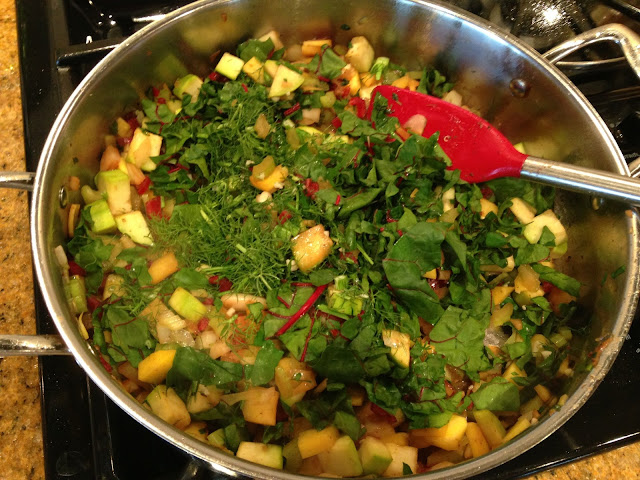 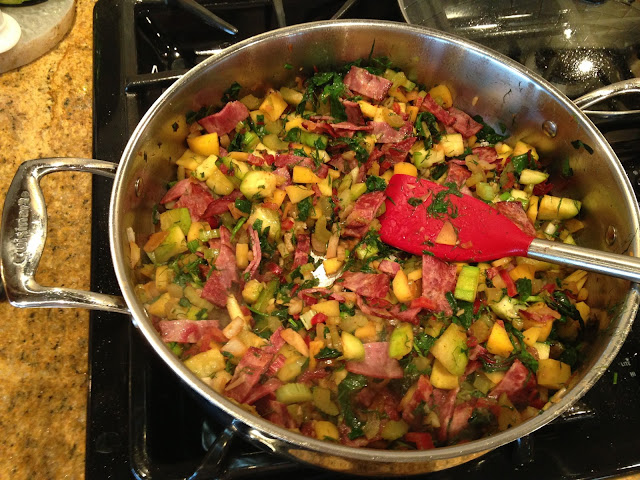 dice up the bacon strips and toss them into the mix. 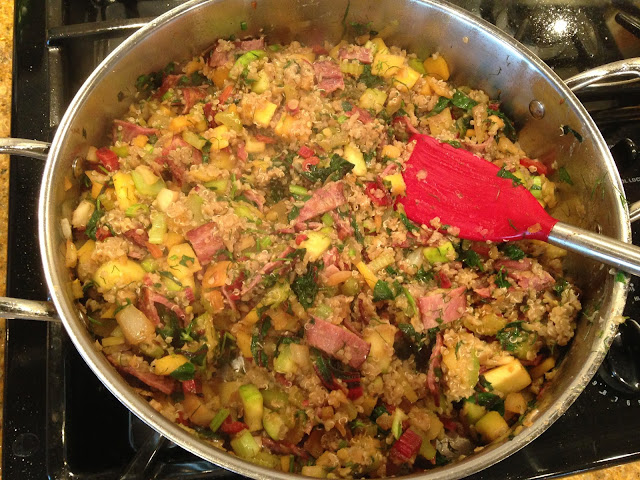 add two cups of the quinoa and red lentil mix.  season with pink himalayan salt (love this stuff) and fresh ground pepper to taste.  this is where i started dancing a little bit with glee... NOTE: you will have mega leftovers of the stuffing.  i divided this amount and put one bag in the freezer for a later date and another in the fridge to use for the soup later in the week. 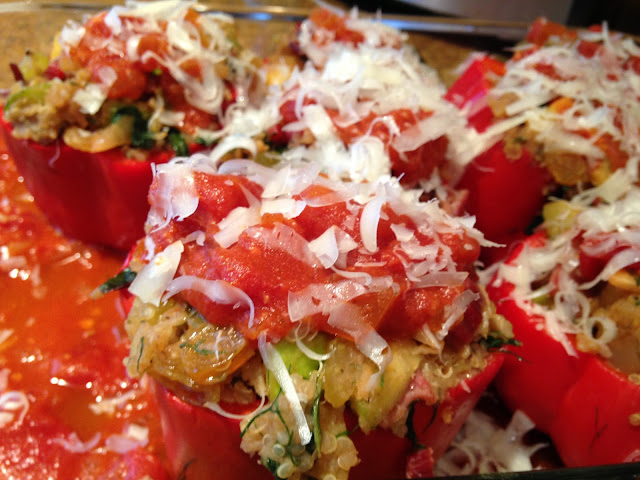 ladle a thin layer of tomato sauce (i used some leftover from the night before) in a baking dish.  stuff the peppers with the veggie mix.  top each guy off with a little sauce and grated cheese (i used aged italian sheep's milk cheese from Whole Foods).  i'm in love with the stuff. 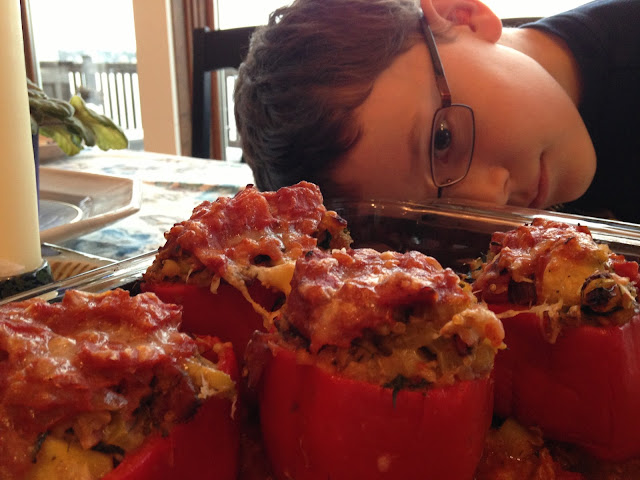 verdict:
i loved them to pieces.
chris: "punt" (this is what i deal with...)
abbie:  struggled but ate about half of her plate.
mac: ate one bite of the red peppers, but loved the rest.
tommy: finished his plate (i had to help spoon bites in his mouth at first though). 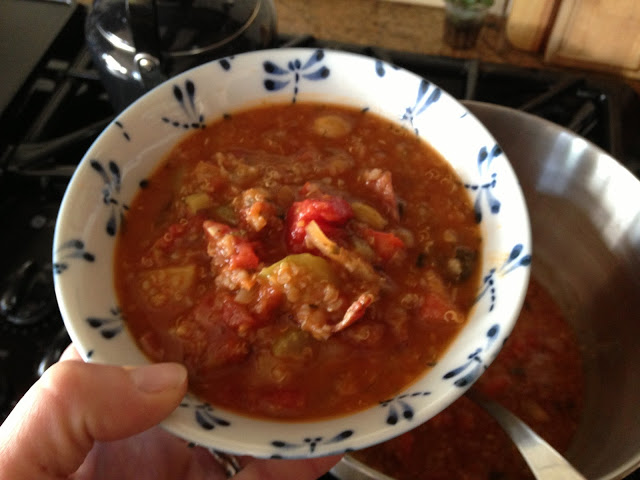 verdict:
i double loved the soup.
chris: "it was gooooood".
kids:  didn't try it cuz i wanted it all to myself and didn't feel like offering it them.  HA!   i'm very selfish sometimes with my food:)

Posted by lindseyshifley at 9:02 AM 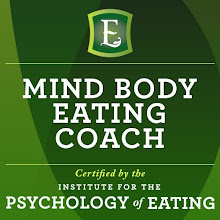 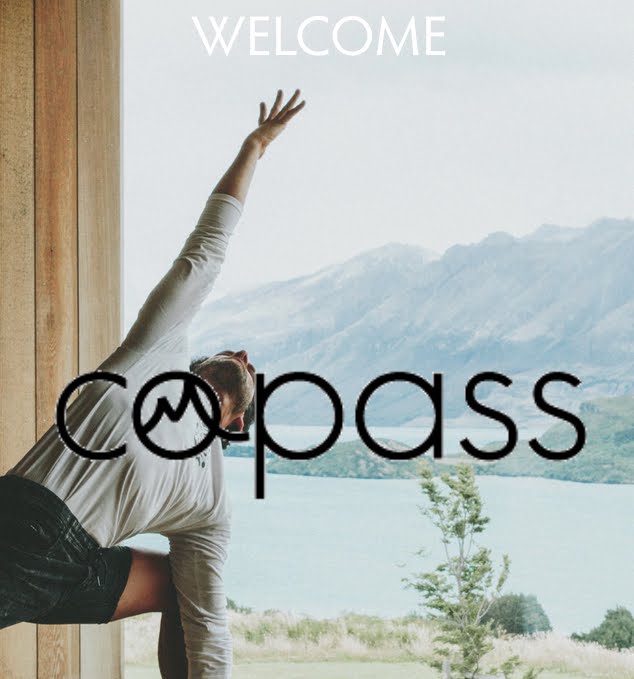 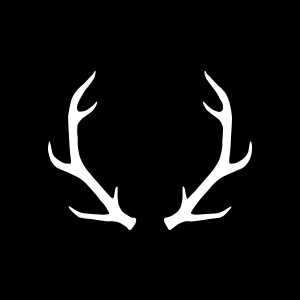